When we walk with the Lord...

Someone mentioned this song at work the other day. It has a special place in my heart because of Summer 2007. It was my second summer at SIL-UND, and I was taking Package B. In the midst of the most academically difficult times in my life, this song was continually on my heart. I thought of it daily as I walked to and from class. I recognize this was a significant time in my life as the Lord softened my heart toward Bible translation work. I don't remember singing this song much as a kid, so it was surprising when I just couldn't get it out of my head. I felt quite ministered to. The Lord gently pounded this message into my head, particularly the first verse and chorus. Please pray with Josh and and me as we seek to bring the light of His Word to those who do not yet have it in the language of their hearts.

When we walk with the Lord
In the light of His Word
What a glory He sheds on our way!
While we do His good will;
He abides with us still,
And with all who will trust and obey.
Chorus:
Trust and obey,
For there's no other way
To be happy in Jesus,
But to trust and obey.


Not a shadow can rise,
not a cloud in the skies,
But His smile quickly drives it away;
Not a doubt or a fear,
not a sigh or a tear,
Can abide while we trust and obey.


Not a burden we bear,
Not a sorrow we share,
But our toil He doth richly repay;
Not a grief or a loss,
Not a frown or a cross,
But is blest if we trust and obey.
But we never can prove
The delights of His love
Until all on the alter we lay;
For the favour He shows
And the joy He bestows
Are for them who will trust and obey.
Then in fellowship sweet
We will sit at His feet
Or we'll walk by His side in the way;
What He says we will do,
Where He sends we will go;
Never fear, only trust and obey.
No comments: Links to this post

If you don't know what I'm talking about, or have never used one, or have never successfully used one, check this out. It will help you out. You might need it. Squatty potties are moving west.  Check out this article my dad just sent me.

For centuries, the great British loo has been a matter of envy to the rest of the world. Thanks to the efforts of pioneers like the legendary Thomas Crapper, we have long since led the world in comfort and hygiene. Now, however, that could be about to change. For most of us, the squat toilet is nothing more than a staple of horror stories about old-fashioned French service stations or the exploits of adventurous backpackers in far-flung parts of India. But this basic form of plumbing, also known as a Turkish toilet or Nile pan, could be coming to a shopping centre near you – and all in the name of cultural sensitivity.

From next week, shoppers in Rochdale who push open the cubicle door expecting the reassuring sight of a modern, clean lavatory could instead be faced with little more than a hole in the ground. Bosses of the Greater Manchester town’s Exchange mall have installed two as part of an upgrade costing several thousand pounds after attending a cultural awareness course run by a local Muslim community activist.

A familiar sight in parts of the Middle East, and still sometimes seen in France and Italy, the toilets require users to squat above them, rather than sitting. With one in ten of Rochdale’s population of Pakistani or Bangladeshi origin, centre managers say they have been told some members of the local Asian community prefer them for cultural reasons.

If you look up this article and review the comments, you'd think the world is coming to an end. I, on the other hand, think it's a great idea. Having grown up in Bangladesh, I can say with credibility that there are perks to this.

5 Reasons For Squatty Potty Usage (according to me)

To make a fair argument, I must express the negatives I see. First, I already mentioned, it kills the knees. But with the added exercise, maybe I wouldn't such bad knee problems. Second, it's way easier to loss your chapstick. You really have to hold on to your stuff and your clothes. Third, I'm left handed.


Squatty Potties, welcome to the west. 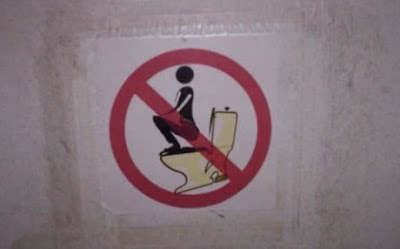 Designate a place outside the camp where you can go to relieve yourself...
as part of your equipment have something to dig with,
and when you (want to) relieve yourself,
dig a hole (in the ground)... and cover up your excrement.
(Deuteronomy 23:12-13)

Thanks to our friend Anna and her cabin, Josh and I were able to get away to Bemidji, MN for a weekend. We took a stack of projects with us, but the most productive thing we did was read and discuss this book: The Missionary Call - by M. David Sills. We've been directing a large portion of our thoughts, discussions, and prayers on what the Lord might have for us next year after Josh graduates.


Then we asked questions of ourselves:

I think some of our finding will be topics for some following blog posts. Stay tuned and comment with your thoughts on a question or two.

In the meantime... I would highly recommend going to Bemidji.

“...to whom I am sending you to open their eyes,
so that they may turn from darkness to light
and from the power of Satan to God,
that they may receive forgiveness of sins
and a place among those who are sanctified by faith in me.”
Acts 26:17b-18

Here's a population clock to see lostness growing as the population increases. I wonder how accurate this is. How could anyone ever measure this? Oh well... it's still sobering. On another note, here's a clock on CO2 emissions, birth rate & death rate simulation. Kinda cool, though I don't agree that global warming "is almost without a doubt the most important issue to face our generation, and quite possibly any generation in history. " And why do they say "almost" and "without a doubt"? Whatever. I think the map is cool. 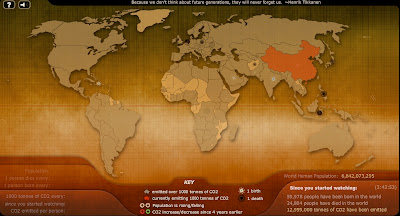 I love maps and numbers. Have you seen anything like these?

Mamihlapinatapai (sometimes spelled mamihlapinatapei) is a word from the Yaghan language of Tierra del Fuego, listed in The Guinness Book of World Records as the "most succinct word", and is considered one of the hardest words to translate.[1] It describes "a look shared by two people with each wishing that the other will initiate something that both desire but which neither one wants to start."

The word consists of the reflexive/passive prefix ma- (mam- before a vowel), the root ihlapi (pronounced [iɬapi]), which means to be at a loss as what to do next, the stative suffix -n, an achievement suffix -ata, and the dual suffix -apai, which in composition with the reflexive mam- has a reciprocal sense.

This is a practical way to support Bible translation, and you'll get some gorgeous cards!